A History of Absinthe Spoons

Marie-Claude Delahaye, founder of the Absinthe Museum in Auvers-sur-Oise, has kindly allowed us to translate her blog on the history of Absinthe Spoons which answers some of the frequently asked questions. 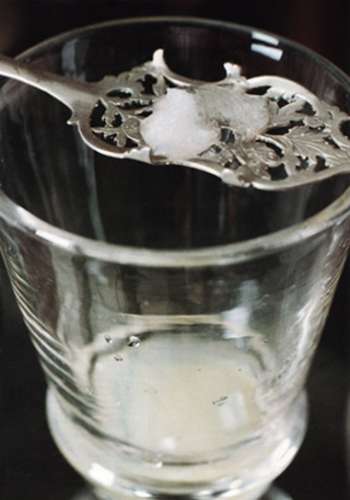 What are the spoons used for?

Absinthe spoons are simply used for placing a sugar cube on.

Absinthe, a spirit obtained by the maceration and then distillation of plants at 68º to 72º, has no sugar added to the bottle. In order to soften this strong spirit, sugar is added just before drinking.

Why not put the sugar directly into the glass?

Sugar does not dissolve in strong alcohol. It is placed on an absinthe spoon and then gently dripped with chilled water.

The sugar starts to dissolve and the sugary water passes through the holes in the spoon and drops onto the absinthe which dilutes and starts the “louche” (turns cloudy).

In addition, by adding the chilled water very slowly, it gently releases the aromas in the absinthe. 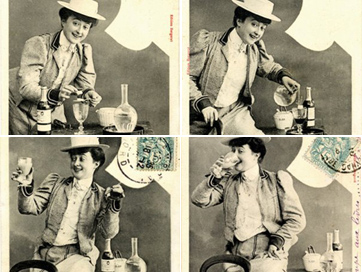 Series of post cards showing the art of making an absinthe.
© Delahaye

Do you add sugar because absinthe is bitter?

Sugar is a flavour enhancer which enriches the taste. It is not there to mask any bitterness.

The absinthe plant is very bitter, but any bitterness disappears if it is properly distilled with double rectification. However, there may be traces of rawness due to the fact that absinthe is no longer aged. In the 19th century, absinthe was left to age in barrels for two years in order to mellow.

You can distinguish a macerated absinthe and a distilled absinthe by the presence of a slight bitterness in the former. 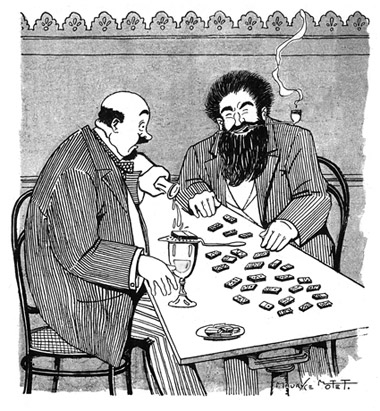 “While I let my sugar dissolve, you will have time to look for your missing domino!” Sketch by Maurice Motet, Le Pêle-Mêle, 1911.
© Delahaye

Has absinthe always been drunk with sugar?

It is difficult to confirm that absinthe has always been sweetened since the start. All one can say, is that from 1860, sugared drinks were very popular judging by the thousands of spirit, liqueurs and syrup labels which demonstrate the importance of such consumption. More information on these drinks can be found in the excellent book by Gilbert Fabiani Elixirs & Boissons Retrouvé, [Elixirs and Drinks Rrediscovered] published by Equinoxe, 1999, which gives recipes for 1252 house aperitifs and family liqueurs. Knowing that every meal ended with a liqueur (which contained 20% sugar), the consumption of syrups was much larger than it is today (a syrup contained 50% sugar) and that water was often sweetened as well. (On every bedside table, a carafe of sugared water was placed ready for the night). It is hard to imagine going from a sweet aperitif like quinquina to an absinthe which is much stronger with harsher flavours without the addition of sugar.

But it was all a matter of taste, the way of preparing absinthe varied according to the different social classes. 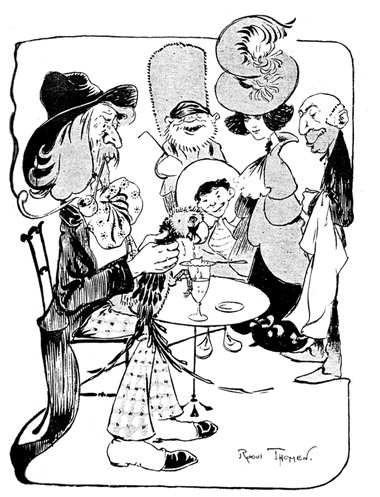 At the start of the 19th century, sugar came as a loaf which was cut with special scissors. In households, it was consumed in powder form which was kept in sugar shakers or jars. In 1843, Jakob-Christopher Rad, originally from Bohemia, worked out how to make sugar cubes which were kept in jars. 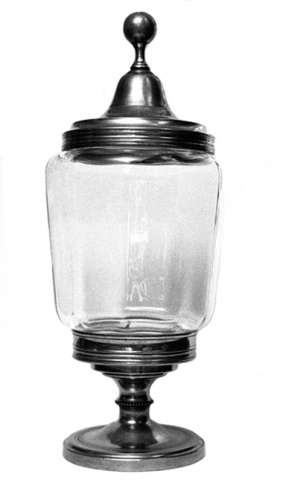 Before special pierced spoons were used, absinthe was already sweetened, often with gomme syrup. [Gomme syrup was made from sugar syrup added to gum Arabic or gum from Senegal with the minimum proportions of 20g / litre]. Orgeat syrup was equally enjoyed.

Waiter! a gooseberry, a soda, an absinthe quick !

Here you are, Sir!

Not too much gomme boy!

Gomme continued to be used to sweeten absinthe right up until the ban. Gomme syrup is still made today. 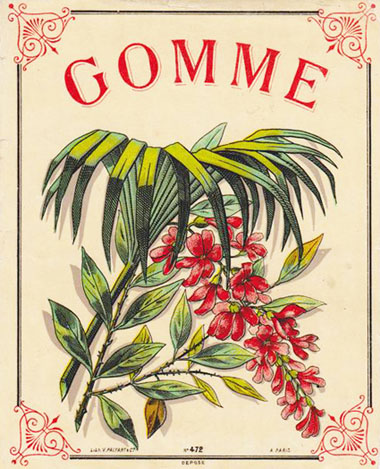 Why are absinthe spoons in so many different shapes?

Absinthe spoons were made by cutlery manufacturers. Each created his own design to stand out from the competition. In catalogues, absinthe spoons were placed in the same section as for household cutlery or other items for the table made by the company. 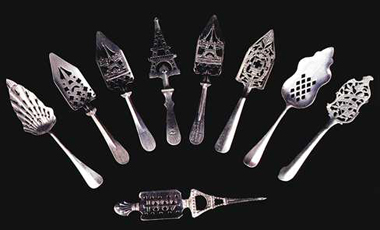 However, there are two basic types of spoons: un-pierced spoons and spoons with holes.

Whether it was for stirring sugared water, coffee or gomme syrup into absinthe, a spoon was necessary. There were several types of these long-handled spoons according to their usage: soda spoons, mazagran (cold, sweetened coffee in a glass) or absinthe spoons. 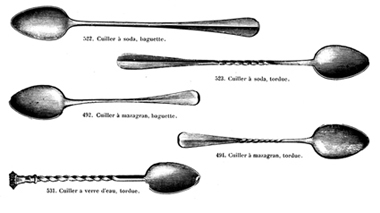 Non-pierced, long-handled absinthe spoons had two functions: that of mixing the gomme syrup with the absinthe or of dissolving the sugar on the spoon before tipping it into the absinthe, as explained by New Inventions of 1894 (see Marie-Claude Delahaye’s Absinthe Review No 5, 1993, p.2): Those who like Absinthe with sugar usually dissolve the sugar cube designed to soften their aperitif, using a simple coffee spoon or sometimes with a flat, pierced spoon. This is why the Manufrance cataloge from 1900 shows the two types of spoons, which it refers to as absinthe spoons, but with two different names. 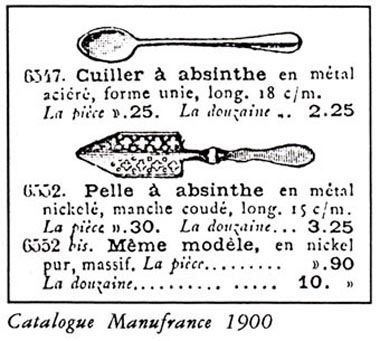 The 1911 catalogue of the Household Cutlery Manufacturers, Velentin and Bonjour, 1 rue Saint-André in Lyon, refer to absinthe spatulas or spoons! 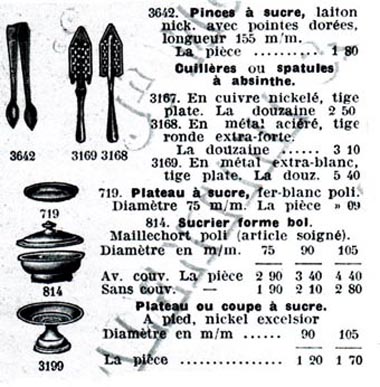 Extract from a catalogue

As for the round shapes, the cutlery catalogues refer to them unambiguously as grills. They are placed on top of the glass, but cannot be used for stirring the absinthe. 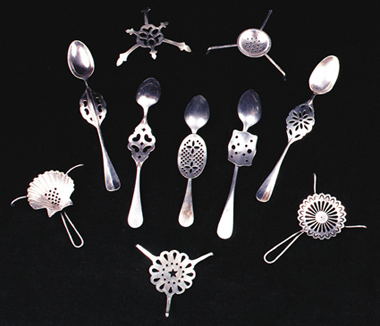 Grilles and long spoons, the sugar is placed on the central openwork area. Collection Delahaye

When do the spoons date from?

Once agreed that you could use either a soda type or coffee type absinthe spoon on which you let the sugar dissolve, or a specific flat spoon, the advertising drawings start to be more precise. In Marie-Claude’s book, Absinthe, advertising designs, Musée de l’Absinthe-Auvers-sur-Oise, edition, 2004 which includes 374 drawings, you can see equally from the same draftsman, a pierced absinthe spoons on one design and an absinthe shovel on another. 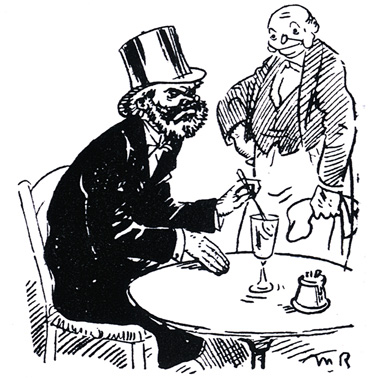 “The Absinthe rises, having fought so hard to arrive at this! … Oh it was well worth it to found the Republic!”. Drawing by Maurice Radiguet, 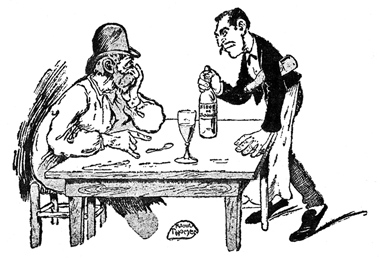 “I have regrets, I want to forget them, put a lot of gomme in my absinthe.” Drawing Raoul Thomen, Le Le Fêtard, 1902. © Delahaye

The ritual of the pierced spoon, designed to hold a sugar cube could not exist before 1850 as sugar cubes, as we know them today, had not been invented.

Alphonse Allaiss story « Absinthes » gives a precise description of sugar dissolving on a “grill”. L’Absinthe, muse des Poètes. Musée de l’Absinthe. Auvers-sur-Oise edition, 2000, p.160. See also the article on Alphone Allais which appeared in Marie-Claude’s blog. For this type of object to be present in a café where the scene takes place in 1885, it must have already been manufactured for some time. Similarly, when Louis Legrand sketches his “military drop” in 1888, means that the spoon has already become the norm. At a time when communications were not as they are today, it takes some time, even many years, for a ritual to spread, establish and become familiar to everyone. 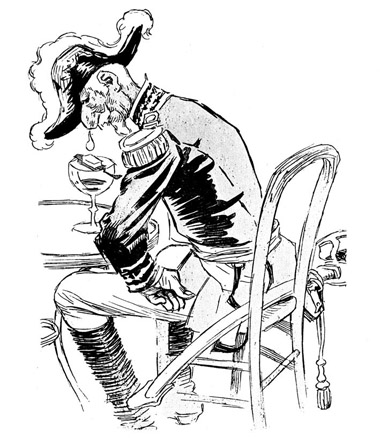 For manufacturers to have had the idea in 1889, to make an Eiffel Tower shaped absinthe spoon, which they knew four years previously was to be the highlight of the Universal Exhibition, this method of consumption must have been well established. Merchandising is not a modern thing, numerous everyday objects were made in the shape of the Eiffel Tower: Quills, spirit bottles, glass candlesticks, moving image pens, and absinthe spoons…

The manufacturers FZ, WJB or even H. Fouquet rue de Montreuil in Paris, stamped their products knowing the impact this would have. A trader called Guillemaud took the opportunity to stamp his brand name on the handle of some spoons, but he was not involved in the manufacturing. Do not confuse a manufacturers name with a brand name.

The Universal Exhibition, which lasted from 15 May to 31 October 1889, attracted 33 million visitors. A large percentage of these visitors would have left with a souvenir: a postcard, poster or small trinket. The Universal Exhibition 1889 was without doubt a springboard which spread the fashion of the absinthe spoon. From then on, it’s representation in newspaper cartoons and even paintings, became more prevalent over the years.

In conclusion, shovel shaped absinthe spoons probably made a slow appearance towards 1880 or maybe slightly before when absinthe was expanding. One day, a creative type thought that dissolving sugar on a normal spoon and then tipping it into the glass wasn’t very practical, so had the idea to drill holes.

Confidentially to being with, the idea spread little by little until it became an effective way to proceed. (First testimonies: Alphonse Allais, 1885; drawing by Louis Legrand, 1888). Then the fashion spread from the Universal Exhibition of 1889, a year of massive absinthe consumption. 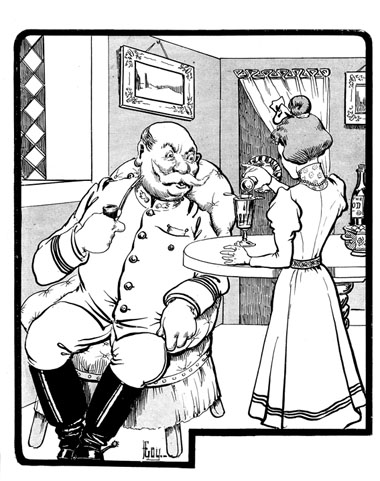 “What, You don’t know how to make an absinthe with sugar ! What do they teach you at school?”. Sketch by Gog, Le Polichinelle, 1901 © Delahaye