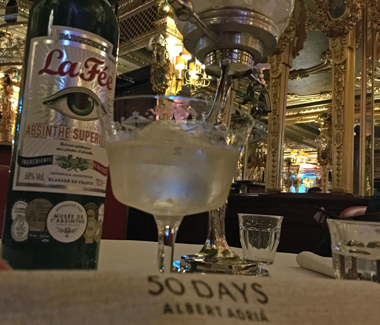 La Fée is honoured to feature in Albert Adrià’s highly anticipated residency at London’s famous Hotel Café Royal.
Starting on the 12th February, running until Saturday the 9th April, 50 days of Albert Adria brings the innovative and contemporary cuisine for which Spain is famous to the iconic hotel.

Albert and his brother Ferran are best known for their 23 years at elBulli, the pioneering Spanish restaurant which held 3 Michelin stars from 1997 until it closed in 2011.  Ferran considers his brother to be one of the finest chefs in the world, and Albert was named ‘the best pastry chef in the world’ in this year’s San Pellegrino World’s 50 Best Restaurants.  He has opened five outstanding restaurants across Spain since 2011.

The 50 days… journey begins in the rather-fitting Oscar Wilde Bar with a selection of bespoke cocktails and signature snacks, featuring La Fée Absinthe in new and innovative ways, and ends in the Domino Restaurant with a ten course tasting menu.  Tickets sold out instantly, with 10,000 more people requesting reservations than were available!  Fortunately anyone can still enjoy Albert’s exclusively created cocktails at the Oscar Wilde Bar throughout the duration of the residency.  Will 2016 see another gastronomic event that can rival this?  We’ll have to wait and see, but this is undoubtedly a fitting tribute to the hotel’s 150th year.