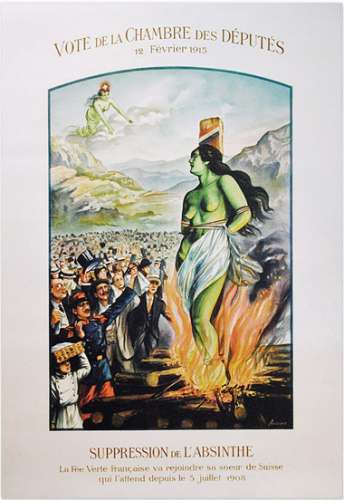 This famous poster shows the Green Fairy being burnt at the stake in France, whilst her Swiss sister looks down from above, having suffered the same fate in 1910

This week saw the centenary of France’s ban on Absinthe; the government unsurprisingly thought that overconsumption wouldn’t help the war effort.  Believe it or not, Russia also banned the sale of Vodka at the outbreak of the 1st World War, but this lasted only 11 years instead of the 97 years of the Absinthe ban.  The temperance movement and French wine producers were delighted by the banning of the “Green Curse”.  In dramatic posters from 1915, the Green Fairy is shown burning at the stake, while across the Swiss border her sister looks down from above having suffered a similar fate.  Thanks to La Fée’s work in the late nineties, we can all once again enjoy the delights of the Green Fairy – why not celebrate with one of our fine absinthes!