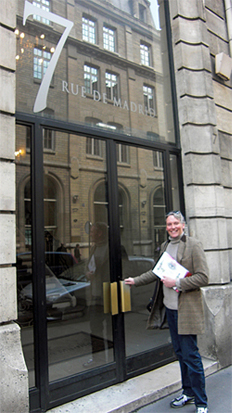 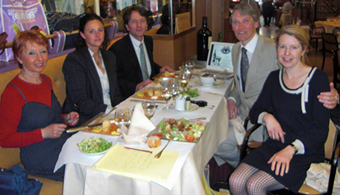 On the 15th of April 2010 the FFS held its first meeting on Absinthe for domestic French producers, George Rowley handed over a dossier of evidence cataloging domestic French Absinthe distilling back to 2000 (with La Fée Absinthe Parisienne, the first legally distilled traditional absinthe in France since the 1915 ban and starting point of the French Absinthe Renaissance).  This predates any legal Swiss Renascence production by 5 years, as records show Swiss absinthe production did not resume until 2005.

The presented dossier (see links) showing approval for La Fée Absinthe Parisienne in France in 2000.  This appears to be the oldest approval from French authorities, and so the starting point of the French Absinthe Renaissance (25th May 2000).  This will form a crucial element of the objections to the Swiss application, and also to any action taken via the EU by Swiss producers. Pernod-Ricard are also assisting in this rally against the proposed Swiss IPG (Geographic Protected Indication).

The proposed Swiss IPG for Absinthe only becomes a serious issue once the Swiss try to enforce any such IPG across the EU via the EEA (European Economic Area).    Should this approach be adopted by Swiss authorities (as commercially driven by a handful of distillers in the Val de Travers region) it would have a detrimental effect on the rest of the world’s appreciation of true absinthe; which recognizes France’s historic rights to this category.  This “right” is shared by both nations and neither has sole rights to the name Absinthe.

La Fée is continuing to work directly with the FFS in their mediations with the Swiss and the EEA over the coming year, looking to ensure the Swiss distillers, as late arrivers to the Absinthe renaissance, do not impact on France’s emerging absinthe industry and thereby protecting French jobs for the future.

The unfortunate loss of selling French Absinthe in Switzerland, though we believe to be morally wrong, is insignificant in global terms historically 90% of global pre ban absinthe sales were of French (Verte/Green) Absinthe, not Swiss (Blanche/Clear).  The remaining 10% would have been predominantly sold in Switzerland. Absinthe had gained huge notoriety in the post colonial French Empire with all echelons of society succumbing to the Green Fairy Paris was the hub of Absinthe culture.  Today the ratio is  still weighted heavily in favour of French / Verte Absinthe and if La Fee’s global sales over the last decade are anything to go by, the weighting is even more in favor of French / Verte absinthe.

La Fées supporting evidence from both our French & Swiss distillations should ensure such a travesty of justice as suggested is not only countered, but ideally reversed to allow the sale of both French and Swiss absinthe around the World [including Switzerland].

For Media and Press: To contact the FFS, please email for the attention of Chairperson Marie-Delphine Benech contact@lafee.com, and we will forward to her FFS email.