Wormwood regularly hits the press, and if you scan the web for entries on wormwood you will find many, from health sites promoting its positive properties to ancient texts highlighting its poison.

Wormwood, named after the Greek goddess, Artemis; the goddess of hunting and childbirth, belongs to the family of Compositae, a group consisting of 180 species. Many artemisia varieties have insecticidal properties, wormwood being the most potent. It is a shrub-like perennial, native to Europe and Asia, with flowers that have a greenish-yellow tint. The whole family share an extreme bitterness from all parts of the plant: “As bitter as wormwood” is a very ancient proverb. Today in some of the Western states of North America you will find large plains covered in certain kinds of artemisia, which are of no use as forage. The few animals that do decide to munch on them, are said to have a bitter taste when eaten.

The bitter oil is extracted from the plant and has a variety of uses aside from absinthe!

The earliest historical reference to wormwood I can find goes back as far as 2800BC. The legendary Chinese emperor Shen-Nung, (also known as “The Divine Healer”) single-handedly tasted every plant in China to see if the taste was good and to find out what was dangerous. Legend has it that during his research he was poisoned seventy-two times in a single day and yet amazingly suffered no long-term effects, however, alternative stories reveal that he turned green and died from toxic overdose you decide! He is attributed with discovering that sweet wormwood cures Malaria now used in a herb based medicine as an anti malaria drug. According to the department of bioengineering, University of Washington, it is also believed to have selective toxicity towards cancer cells. 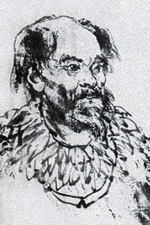 Medicinal uses for wormwood also date back to the 1840s where French Foreign Legion troops fighting in Algeria were given absinthe to prevent various fevers. This gave the troops “a taste” for absinthe which they brought back to Paris and it quickly engaged the French society.

The use of wormwood leaves and combining them with alcohol is ancient, with references appearing in old texts such as the Bible and Egyptian papyri. For many centuries its many uses have included, a repellent for moths and fleas, a general pesticide and a worming medicine for people and animals.

The Greek philosopher, Pythagoras, claimed it eased childbirth and Hippocrates, father of medicine, recommended it for a number of ailments, including menstrual pain, rheumatism and anaemia.

Wormwood has also in the past been used in rituals by adding it to herbal incense to aid psychic reception, high spirits, and relieve anger and negativity.

The Romans referred to common wormwood as absinthium from the word absinthial meaning bitter.

Wormwood was also once used as a traditional stuffing for the goose.

Today wormwood is used as a mild sedative, to eliminate worms, increase stomach acidity and lower fever. It can help you regain your appetite and enhances digestion. It eliminates toxins and congestion in the gut and has also been used to treat liver, gastric gallbladder and vascular disorders and migraine. It is used for treating infections, fever, colds and flu. Moroccans call it Chiba, which is Arabic for wormwood and adds it to their tea during the colder months to keep out the cold. Wormwood’s uses are not only limited to ingestion, this herb can be used for wounds, skin ulcers, blemishes and insect bites.

Wormwood doesn’t only have these amazing properties but it forms the intrinsic quality of absinthe. 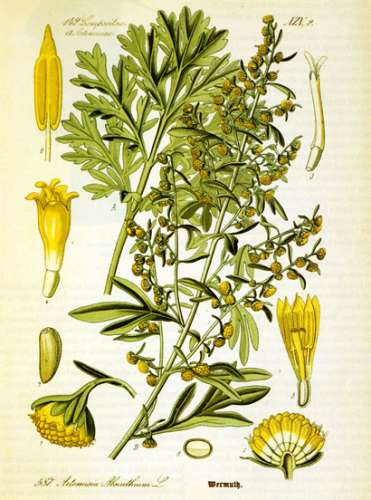 ‘On St. Luke’s Day, take marigold flowers, a sprig of marjoram, thyme, and a little Wormwood; dry them before a fire, rub them to powder; then sift it through a fine piece of lawn, and simmer it over a slow fire, adding a small quantity of virgin honey, and vinegar. Anoint yourself with this when you go to bed, saying the following lines three times, and you will dream of your partner ‘that is to be’

It is often quoted that Chernobyl is Russian for Wormwood but it’s actually a myth. Chernobyl is actually a Ukrainian word. It is often taken as meaning ‘wormwood’ but actually means ‘black (dark) bush’ and of course, true Artemisia absinthium wormwood isn’t black or dark. It’s green with silvery hairs on one side.

The Book of Revelation, Chapter Eight:

10. And the third angel sounded, and there fell a great star from heaven, burning as it were a lamp, and it fell upon the third part of the rivers, and upon the fountains of waters;

There was a whole lot of pseudo-religious hysteria having to do with the supposed apocalyptic references to wormwood, after the Chernobyl nuclear accident, but of course, the biblical reference isn’t to Artemisia absinthium either, as that species is not native to the middle east. So it’s the usual old-mistranslation problem. The Artemisia species mentioned in the bible is probably Artemisia Judaica.

According to the Ancients, Wormwood counteracted the effects of poisoning by hemlock, toadstools and the biting of the seadragon. 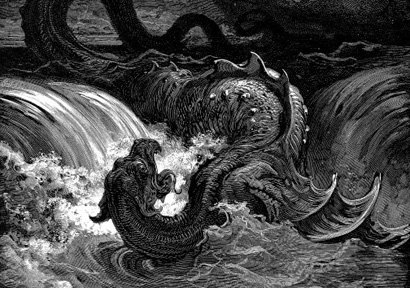