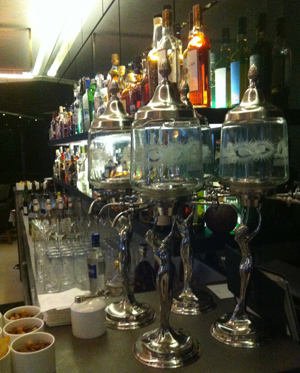 With La Fée Absinthe fountains stood atop the Art Deco bar we enjoyed the perfectly balanced La Fée cocktails made by the talented Gabor Papotti. The refurbishment has been carried out to the high standards of architect Sir David Chipperfield, whose three year project has brought the hotel into the 21st Century, while retaining it’s original charm and splendour.

The Café was frequented by writers and artists such as Oscar Wilde and Aubrey Beardsley. The conversations at the Café would have been profound: Arthur Conan Doyle, H G Wells, George Bernard Shaw, Rudyard Kipling, W B Yeats, Walter Sickert and James McNeill Whistler were all patrons.

After substantial rebuilding in the 1920s, the Cafés appeal widened as did its clientele. In the 1930s and 40s, Augustus John, D H Lawrence, Virginia Woolf, Winston Churchill, Noël Coward, Jacob Epstein and Graham Greene would be seen dining there.

Royalty also took to the place, and the Prince of Wales, later to abdicate as Edward VIII in order to marry Mrs Simpson, and The Duke of York, later to become George VI, often took lunch at the Café, as latterly did Diana, Princess of Wales.

The magnetic appeal of the Café continued to the later stages of the 20th century. Through the now venerable doors came stars such as Brigitte Bardot, Elizabeth Taylor, Mick Jagger and Muhammed Ali all the movers of new Sixties Avant Garde.