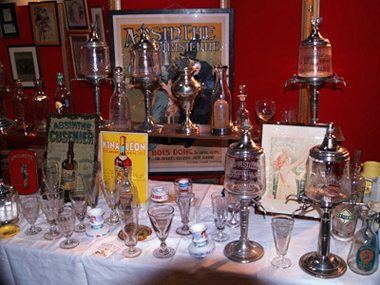 The Absinthiades is an event that takes place in Pontarlier, the historical centre of French absinthe production every year where the public, VIPs and absinthe professionals get together and blind taste a selection of the highest quality absinthe from France and Switzerland. The judging took place over the three days of the event (3rd – 5th October 2008).

Absinthe aficionados gather to discuss their favourite spirit, and enthusiasts show off their most valuable absinthe memorabilia. The public are also able to taste and sample any of the 25 entries to the competition at the bar and meet many of the makers themselves.

Marie Claude Delahaye, founder and curator of the Musée de l’Absinthe was also in attendance signing copies of her books and several of the local distilleries have an open door policy all weekend allowing first-hand viewings of the distilleries.

But the centrepiece of the event is undoubtedly the competition. Two juries judge the absinthes, and award points based on pre-determined criteria such as taste, colour and louche, with two golden, two silver, and two bronze absinthe spoons awarded. Judging is done blind after all the absinthes are decanted & sealed by the competition officials.

The final stop of the trip was Au Bon Echanson, who along with the town’s museum were responsible for organising the event. Checkout the massive absinthe fountain in the window!