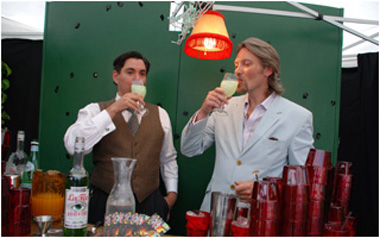 “Absinthe” & “La Vie” on Pier 17 at the South Street Seaport, New York promised to delight the crowd at their premier evening in the beautiful surroundings of the Spiegeltent and they didn’t disappoint. 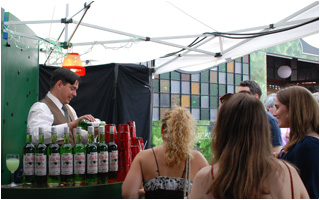 Method: Shake with ice and strain into a highball glass and fill with seltzer 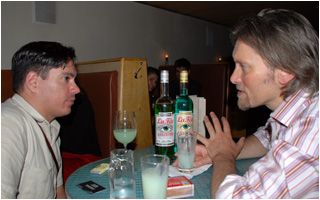 Sasha started out as a barista in New York with the intention of opening a classic coffee house. To help raise money for his project he decided to get a part time bar job and the rest is history. Since opening Milk and Honey he has opened Little Branch in the West Village and a further 2 are due to open shortly. Sasha has been written about in many publications around the world for his contributions to the cocktail culture and New York Magazine named him one of the most influential New Yorkers of 2006. 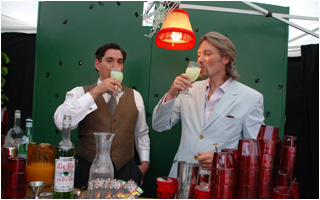 After cocktails guests move to the Spiegletent for the first of the evening’s performances (absinthe). These iconic tents of glass, mirrors, teak floors and velvet drapes provided the perfect back drop to a jaw dropping provocative performance of high flying acrobats. The size of the venue is extremely intimate and allows its audience to get close to the performers. Here is a taster. 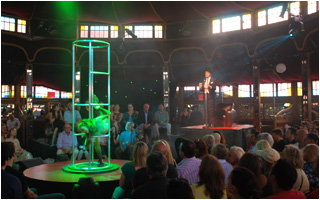 Absinthe kick starts with the fantastic Paul  Capsis, taking the stage, glass of La Fée Absinthe Parisienne in hand. Paul is then entertained by the green fairy performing an amazing seductive opening routine in front of a mesmerised crowd.

Nate Cooper juggling several machete-like knives while uncontrollably bouncing on his pogo stick in high heels leaving the audience quite breathless if not slightly relieved they are still intact when it’s over. The Williers, a roller skating duo, perform a high speed routine with impeccable balance combined with centrifugal force that brushes so close to spectators they can feel the wind on their faces and leaves one volunteer from the audience very dizzy!

The audience quite often involved when they would rather not be and regularly ducking from low flying limbs, had a blast and the excitement wasn’t only confined to the tents! The Spiegel location has a perfect view of the East River and the Brooklyn Bridge and you can take your pick on how you wish to enjoy it. There is a hammock filled chillout area, restaurant, bar, private sections available for hire, and a dance floor with live entertainment. 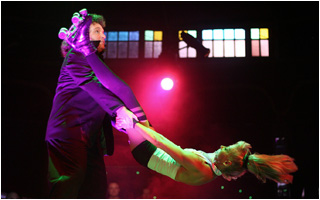 Once “Absinthe” and “La Vie” ended guests took to the dance floor by the river and enjoyed music and live bongos & drums, before Lady Sovereign took stage in the Spiegel tent

La Fée’s first visit to New York was definitely one to remember!!