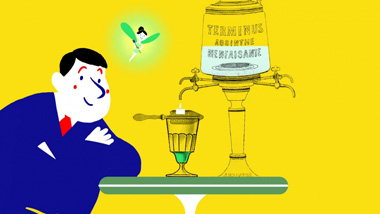 French TV Channel Arté has produced a beautifully illustrated story of Absinthe written by Nikola Obermann for the Karambolage programme.

Here we have a little spoons with holes.  No, I’m not joking, it’s an essential tool for drinking this legendary spirit.  Yes, I’m talking about Absinthe.

For this ritual, you also need an elegant flared glass with an engraved line to mark the measure of absinthe, a sugar cube and a water fountain with little taps.  And of course, you need Absinthe. 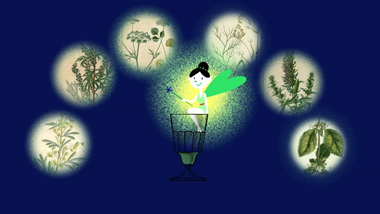 It is a green liquid, which is why it is nicknamed “the Green Fairy”.  This Green Fairy contains many herbs, usually Grand Wormwood, armoise, anise, fennel, hyssop, melissa and lots of alcohol: between 45% and 72%.  Place the spoon on the glass, put the sugar cube on top, turn the little taps and watch : the drops of water gently dissolve the sugar cube, while slowly filling the glass, creating a milky louche which you can contemplate while I tell you the turbulent history of this strange brew. 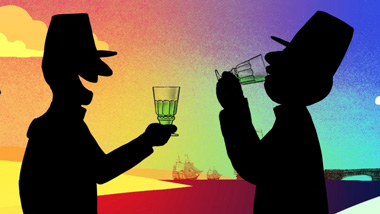 It all started in the small village of Couvet, in the Swiss canton of Neuchatel.  In 1798, a major Dubied founded the first absinthe distillery, Dubied Père & Fils.  Some years later, his son started his own distillery, a few kilometres from there in Pontarlier, France.  For years, absinthe was a regional drink and would no doubt have stayed that way if France had not colonised Algeria in 1830.  The troops leaving for North Africa were given absinthe to purify the water and avoid illness. 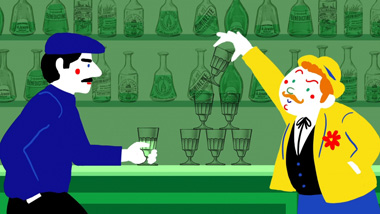 Who knew that the soldiers would like this drink so much that they continued to drink it when they returned to France, in the Parisian cafés, where the bourgeoisie copied this new trend imported by these valiant heros in uniform.  Even women joined in.    Enthusiasm was such that absinthe quickly represented 90% of apéritifs in France.   You should know that in the mid 19th century, there was a catastrophe for wine producers : mildew and phylloxera, respectively a fungus and an aphid, decimating nearly the whole of the French vineyards who could not re-plant for decades.  After this wine prices soared and absinthe became hugely popular.  The bourgeoisie drank it because it was exotic, the working classes because it was cheap and artists because of its so-called creative boost. 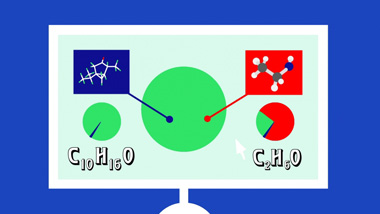 What ?  Thanks to a molecule, thujone, active ingredient in Wormwood, which in very high doses can cause epilepsy and hallucinations. 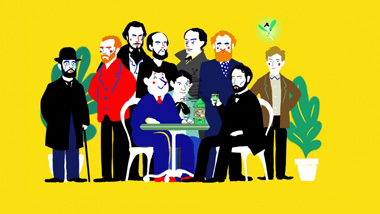 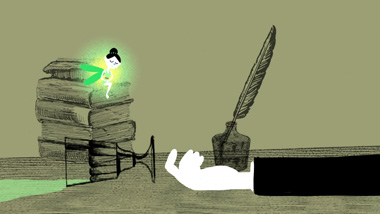 Toulouse-Lautrec carried absinthe in a hollow walking stick, Musset missed sessions at the French Academy, Van Gogh cut off his ear after a binge with Gauguin, Verlaine died after a long and terrible decline.  Absinthe began to get a toxic reputation, it represented the bohemian lifestyle and artistic inspiration, but also madness, murder and suicide. 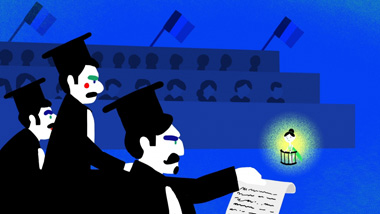 The authorities, the Catholic church and doctors got worried, they even invented the term « absinthisme » to describe this addition which they viewed as worse that alcoholism.  In 1906, a petition against absinthe received 400000 signatures.  There were no health warnings on the back of the spoon « Absinthe makes you mad, criminal, causes epilepsy and tuberculosis, it kills thousands of French people each year.   It makes men into wild animals, women into martyrs, children into degenerates, it disrupts and ruins families and therefore the future of the country”

The campagne’s motto was « All for wine, against absinthe » would be supported unsurprisingly by the wine lobby and ended up with a total ban in 1915.  A direct consequence of the ban was the introduction of a new spirit, with the same aniseed flavour but without the incriminating molecule: Anis Pernod, Pastis de Marseille, and many more.

And absinthe ?  It continued to be distilled in secret, usually in its home region, before being rehabilitated back to France in 2011.  And yes, in the meantime scientific studies proved that it was not the thujone {which was at very low levels} which made people crazy, but the fact that some absinthe was made with alcohol of such poor quality that it was actually toxic, and above all that people drank too much.  It was as simple as that.