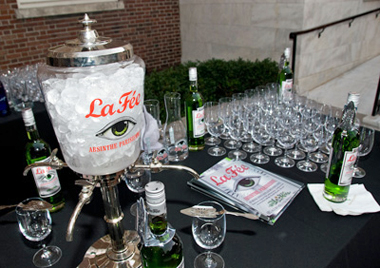 Between the two world wars no two cities engaged each other in collaborative artistic enterprise more than Paris and New York with Paris being the capital of 19th Century refinement and New York, the upstart challenger that represented 20th Century dynamism.

The exhibit is a diverse exploration of architecture, design, film, fashion and the performing arts. Over 800 Guests were invited to view works from Helena Rubinstein, Coco Chanel, Josephine Baker and of course well known Absinthe fan Salvador Dali.

Following La Fée’s recent launch into the states we were the brand with the perfect product to blend these two cultures together, once again introducing New York to some of the sophisticated decadence of Paris in the 19th Century. All guests were offered La Fée Absinthe Parisienne prepared in the traditional serve, proving to be a hit throughout the evening with many guests returning for second or even third glass of the green fairy.

La Fée also ran a competition for all of its newsletter subscribers to attend the event with winners accepting tickets to the event as well as lifetime memberships to the Museum.

One of the contestants celebrates her win in style with La Fée!

As a final part of the donation, La Fée offered a very unique prize for the Museum auction being held by charitybuzz.com – an exclusive Manhattan “Bar Crawl” courtesy of La Fée Absinthe. Over the evening the winning couple will be accompanied by brand ambassador Dan Eves and taken to some of New York’s hottest bars including Pravda, Apotheke, Blue Owl, World Bar and Bookmarks Lounge

The Exhibit is running until the 22nd of February at the Museum of the City of New York at 1220 5th Avenue. See here for more details.