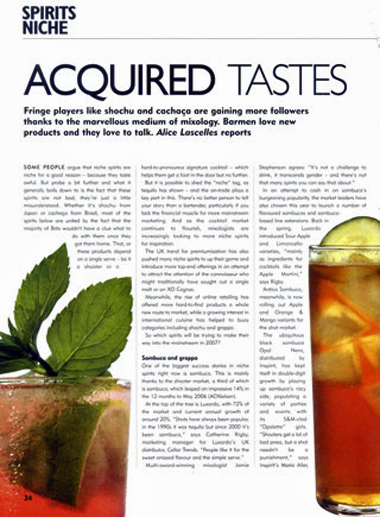 There are many niche spirits trying to make their way into the mainstream market, Drinks Business discusses who, how and why in their November 06 issue, mentioning absinthe as being ‘set for some interesting developments in 2007’.

‘Many niche spirits are introducing more top-end offerings to attract the attention of the connoisseur who might traditionally have sought out a single malt or an XO Cognac.

Barely a year goes by without absinthe being heralded by some misguided journalist as the next big thing. The next vodka it will never be, but absinthe nonetheless looks set for some interesting developments in 2007.

Off-trade leader La Fée, which already offers both French and Czech-style absinthes, will be launching two new super premium offerings targeted at the XO market. Classed as “extra-superieure”, La Fée XS Français and La Fée Suisse are hand-crafted, small-batch absinthes designed to be drunk the traditional way – with sugar and water – with an online RRP of around £45 for 50cl. “We do a lot of business online,” says George Rowley, MD of La Fée’s owner BBH Spirits. “We expect to sell around half a million pounds’ worth online this year exporting to over 20 countries in three continents,” he adds.

Meanwhile, the core La Fée brands are flourishing; Rowley says a distribution with niche spirit specialists Cellar Trends has seen sales jump 40% in the last 12 months. A new deal with Student union body NUSEL, which has taken on both standard varieties at a special lower ABV of 45%, also kicks in this winter. 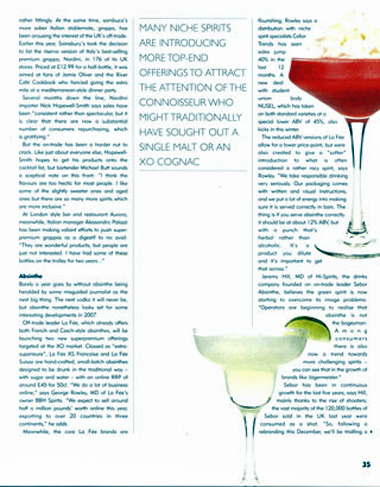 The reduced ABV versions of La Fée allow for a lower price-point, but were also created to give a “softer” introduction to what is often considered a rather racy spirit, says Rowley. “We take responsible drinking very seriously. Our packaging comes with written and visual instructions, and we put a lot of energy into making sure it is served correctly in bars. The thing is if you serve absinthe correctly it should be at about 12% ABV, but with a punch that’s herbal rather than alcoholic. It’s a product you dilute and that’s important to get across.”‘