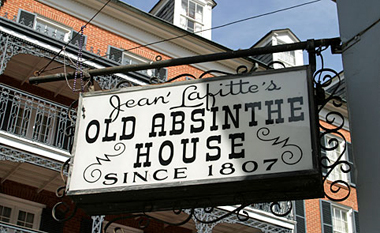 In a unique spirit of co-operation celebrating the resurgence of absinthe, the famous Old Absinthe House in New Orleans chose to celebrate a historic milestone with the world’s leading international absinthe brand, La Fée Absinthe, who were visiting the city for the annual “Tales of the Cocktail” festival from 18-22nd July, 2007.

The event coincided with George Rowley’s nine year anniversary of signing the landmark document which allowed absinthe to be re-introduced into Europe, beginning the start of the European absinthe revival in countries where the spirit had previously been banned. 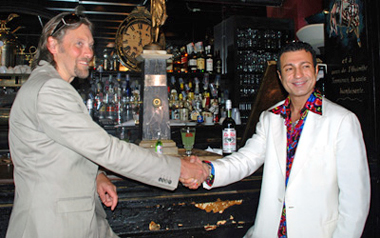 To co-incide with the bar’s 200th anniversary, two antique marble absinthe fountains belonging to the bar, which are 150 years old, were pressed back into commission for the first time in nearly a century to create two glasses of traditional French La Fée Absinthe for a birthday toast between Jober’t Salem, President and owner of The Old Absinthe House, and George Rowley, CEO of La Fée Absinthe who was visiting the city.

Working just as well as they did when first installed 150 years ago, in the traditional French absinthe ritual, water was slowly dripped from the stunning marble and bronze fountains onto sugar cubes placed on slotted absinthe spoons into the emerald-green absinthe below, which turned a milky opalescent. 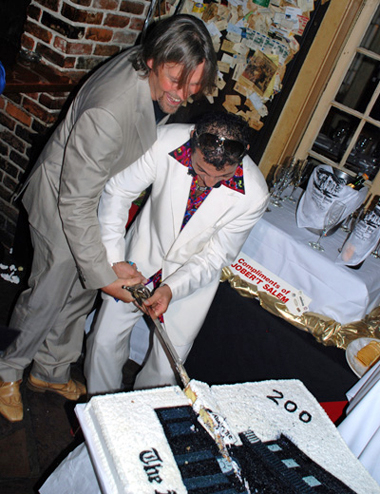 A spectacular giant black and white birthday cake depicting the outline of The Old Absinthe House had been specially baked and iced for the occasion, and Jober’t and George took considerable pleasure in dramatically cutting the cake with a three foot celebratory sword in keeping with the size of the confection! Live jazz music from a local band completed the absinthe celebrations in style, and reminded guests of the fantastic fusion of music, drink and cuisine that epitomizes the spirit of New Orleans.

The Old Absinthe House, on Bourbon Street in the heart of the French quarter, was a favoured haunt of famous artists and writers such as Tennessee Williams, Oscar Wilde and Ernest Hemingway, who all spent time at the bar sipping their favourite absinthe known as La Fée verte (the green fairy).

Since the US absinthe ban in 1912 the famous bar has been unable to serve true absinthe, and has had to serve pale imitations, and the La Fée toast was the first time in nearly a century the bar owners had been able to enjoy the true taste of absinthe.

New Orleans was the main absinthe-drinking city in the US prior to absinthe’s prohibition because of its French connection, and its French-speaking population at a time when absinthe was once more popular than wine in France. The city has been strongly linked to absinthe and cocktails, including The Sazerac, ever since. Absinthe was banned in the USA in 1912, but the Old Absinthe House has remained open, and is a favourite meeting point for locals and visitors.