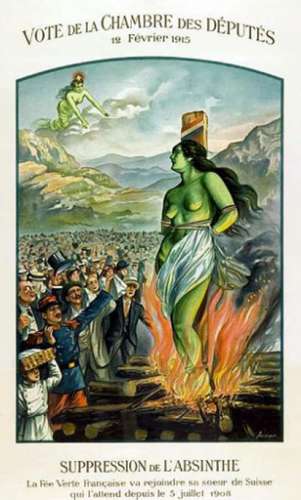 Dispelling speculation & rumours on a subject  of great interest:  The French Government’s repeal of the Absinthe Ban of 1915…  One moment, please!

3] Consider a full repeal of the French 1915 ban as it is out of date and redundant; with the newer EU directives on spirits proven to be more than sufficient to protect the consumer and guard production quality and standards. In fact La Fée Absinthe is sold around the world, as well as many other French produced Absinthes and is sold in France as Aux Plantes d’Absinthe

It’s great to see that on the Sénat (Upper House) voted and passed (the first stage of):

“The law of March 16, 1915 as amended, concerning the prohibition of the manufacture, wholesale and retail, and the movement of Absinthe and similar spirits”.

The law of March 16, 1915 prohibits French producers from using the name “Absinthe”.  They can only produce and market drinks which meet the definition of Absinthe under the name “Spirit made with extract of wormwood plants”

Switzerland intends to file the name “absinthe” as a geographic protected indication (IPG) in the context of the mutual protection of geographical directions which is currently under negotiation with the European Union.  In the absence of opposition from Member States, recognition by the European Union of the “Absinthe” IPG would give Swiss producers the monopoly on using this term to the detriment of French producers.  However, because of this agreement, it will not be possible to oppose the sale of Swiss drinks called “Absinthe” in France as this drink is in conformity with the EU name.

To avoid this competition disadvantage, repeal of the 1915 law is required.

This repeal has no consequence for the consumer as producing alcoholic drinks using wormwood (Absinthe) is already governed by EU rules.

Contrary to rumours that the French Absinthe Ban 1915 has been repealed, we must advise the French authorities are only at the first stage only of reviewing the legislation concerned and that only the French Sénat (Upper House) has voted in favour of its repeal so far.

The legislation now moves to the Assemblée Nationale (Lower House) for its consideration and vote. Should the Lower House vote in favour of the repeal, it will then return to the Sénat for a final vote for approval.

France’s full recognition of the Green Fairy’s return would be a fitting tribute to Absinthe’s Renaissance; a journey I have enjoyed since La Fée returned Absinthe distilling to France in 2000.

We’ll keep you fully informed of any future developments as they evolve.